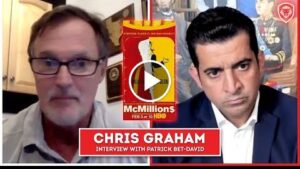 About the guest: Chris Graham was a FBI agent that investigated the McMillions scam that was going on in the early 2000’s. The McDonald’s Monopoly game scam that occurred between 1989 and 2001, perpetrated by Jerry Jacobson, who was in charge of security for the agency that ran the promotion, and several accomplices, Agent Graham helped take Jerry Jacobson down.

About Patrick Bet-David: CEO, author and Founder of Valuetainment Media. Patrick has interviewed athletes, notorious individuals, politicians, authors and entrepreneurs from all walks of life.

To reach the Valuetainment team you can email: info@valuetainment.com

We use cookies to ensure that we give you the best experience on our website. If you continue to use this site we will assume that you are happy with it.OkPrivacy policy